The Battle of Battle Play 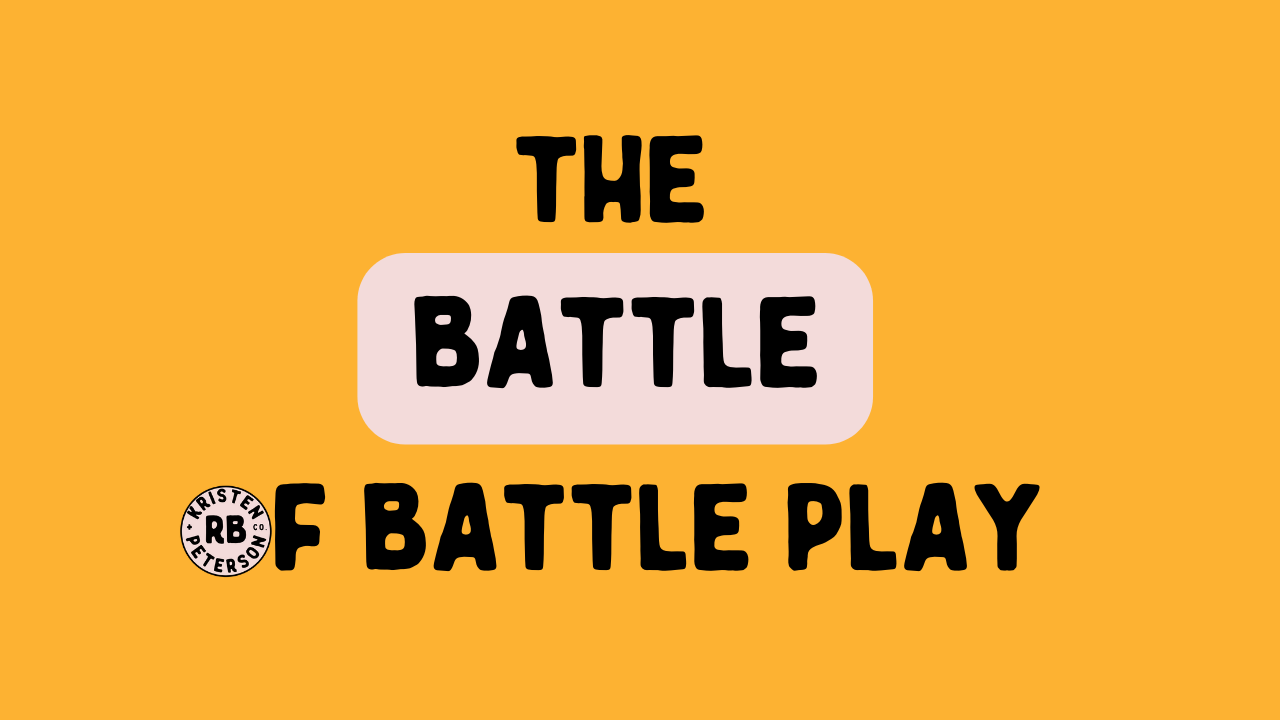 I get a lot of questions via Instagram about things early childhood educators need help with.  Recently I received the following question:

How do you keep your classroom from turning into chaos during center time when you have 3 boys who only want to do ”play fighting” with any and all items that resemble people and animals? I know it’s not the right solution, but I’ve removed the Alpha-Bots, Mr Potato Head and People Counters from the shelves because I just can’t keep redirecting and also retain my sanity. Even the sensory bin turns into a noisy “battle” of some sort. Now that their favorite battle items are put away, the animal figures and dollhouse people are going to be next... What to do?

Weapon play, battle play, play fighting, rough and tumble play, these are all such misunderstood topics when it comes to early childhood and childhood in general.

Battle play - the original question asker described this type of play as children using ANY toy as a battle figure.

Sooooo, why battle play and why do many children enjoy this type of play and actively seek it out?

Let’s chat mammals for a moment.  In his book Play, by Stuart Brown, he tells the story of a polar bear and a sled dog.   A musher was in the Canadian wilderness with his sled dogs when he saw a gigantic and very hungry polar bear approaching his sled dog team quickly.  The polar bears were very hungry that year because of ice melt and seals not being readily available.  The musher could tell that the polar bear was very hungry by its appearance.  The bear headed straight for Hudson, one of the spunky sled dogs at the front of the pack.  The musher was SURE the polar bear would attack Hudson.  But, on the polar bear’s jaunt across the snow laden field, he saw Hudson bow down in a play pose and wagged his tail.  All of the sudden the polar bear stopped short and responded to the dog’s invitation to play. They began playing and wrestling around in the snow together!  No teeth bared, no raised hackles.  You would think that the dog would have been in defense mode seeing that predator coming straight for him, but looking back, the play signals were already apparent before the two even met.  The polar bear didn’t approach with aggression, he approached quickly, casually, and in a loping way, not a dead on sprint with hackles raised and teeth bared.  The dog could tell by the bear’s signals that he wanted to play so the Hudson responded to that play invitation by bowing and wagging his tail. 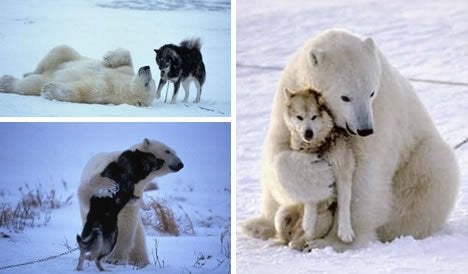 The amazing thing is that they played for about 15 minutes.  The bear even embraced the dog affectionately at one point in their play sesh.  For a week straight, the bear returned for a play battle with the dog.

So what does this mean?  Mammals play.  They play when they need to play.  And play battles are a very instinctual form of play.  Watch any baby mammal and they play fight with each other.  Mammals may have to fight for survival at some point in their lifetime so their brains are wired to seek out opportunities to practice play battles so when they have to do the real thing, they have had practice.  But, you can also tell when two kittens are play battling and when they are truly ticked off and REALLY fighting.  Their body language and facial expressions are different.

Before modern civilization, humans had to hunt and fight to stay alive.  And, because science says we evolved from mammals, we know our brains have been wired in the same way.  We have been programmed over millions of years to seek out play and play battles so we can practice for when it is really needed.  This type of behavior is perfectly normal and perfectly OK for young children!  If we shut it down in our classrooms because it makes us (the adults in the room) uncomfortable, we are taking away they chance for them to learn very valuable skills that are necessary for them when they face a situation that brings great anxiety or stress.

In order for us to get past the uncomfortable feelings that play battles and play fighting causes us, as the adults in the room, we have to name it and dissect it.   We have to break it down, recognize how developmentally appropriate and innate this type of play is, recognize our own yucky baggage that may come with this type of play, tear down the walls of your discomfort and find ways to allow this type of play, in some way, in your environments. And that is what we are going to do now…

We now know that battle play or play fighting it is an innate, instinctual type of play.  Our children need it and will seek it out because their subconscious brain is screaming at them to learn how to fight just in case a polar bear comes their way.  Again, if we shut this type of play down, or label children as ‘bad’ for engaging in this type of play, we are suppressing their innate desire to learn and, in turn, making them feel like they are ‘bad’ or misbehaving for something they really have no control over.

Now that we have drilled in the point that play fighting and battle fighting are subconscious and insticutal to humans and children, we need to get through the reason why it makes adults uncomfortable. 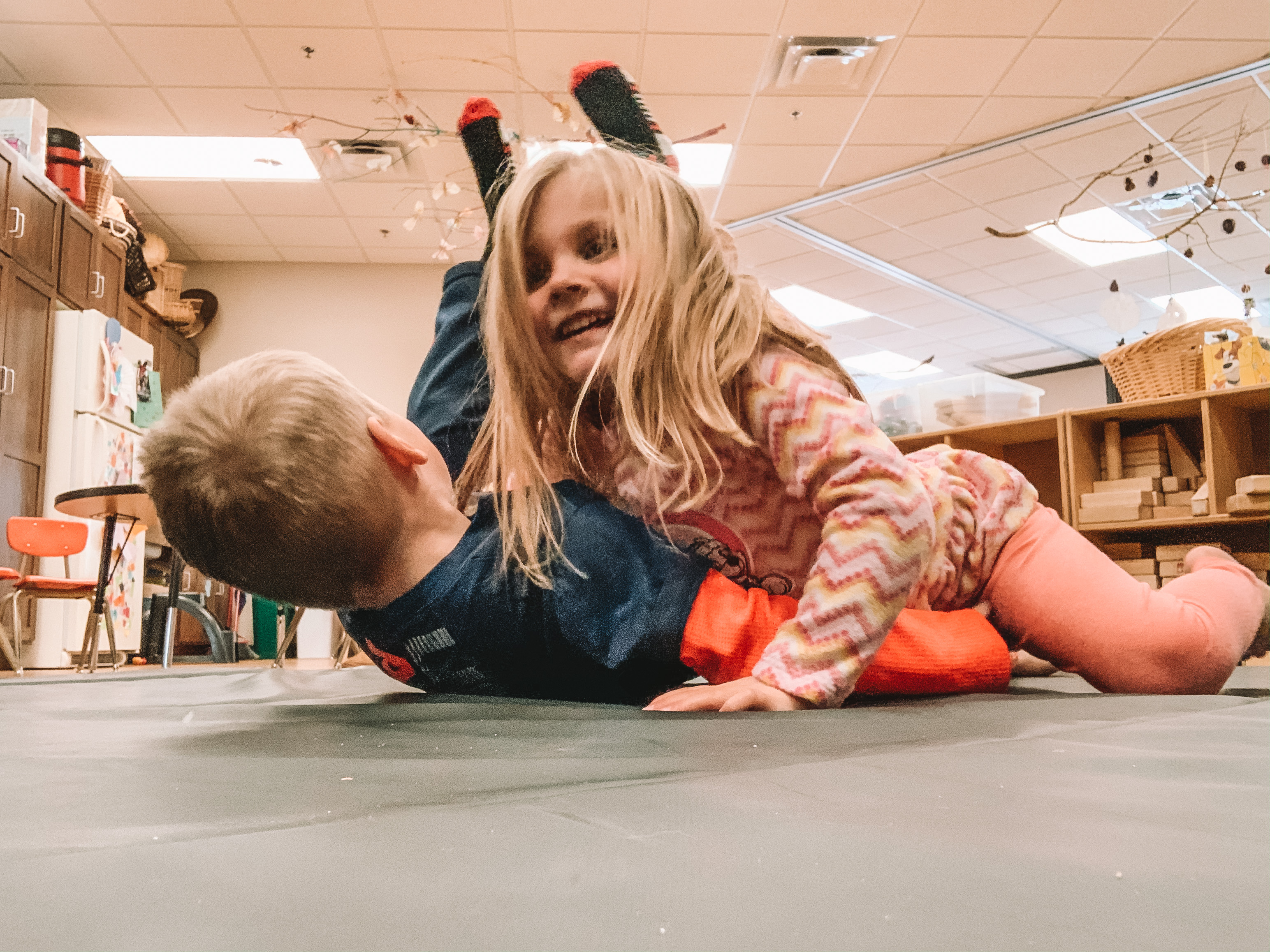 I won't name every reason this makes adults uncomfortable, but I think the very root cause of our deep discomfort and unease with battle play and play fighting comes from the social constructs that have been put into place over time about how adults think children should act.  Hunter/gatherer civilizations encourage this type of play.  Move in to any modern civilization and this type of play is seen as a no-no.  Why?  I have a theory my own theory.  When humans fight with each other, stress chemicals are released into the body as a response to a threat.  Humans are generally not taught how to finish the stress cycle (I’ll tell you how to finish the stress cycle in a bit)  so these feelings of stress are left in the body.  Because they stress chemicals are left in the body after a fight (whether it be verbal or physical) over time, our brain tells us that fighting is BAD and the emotions we attach to fighting are that of anxiety, unease, and stress.  In order not to feel those things, we shy away from any type of confrontation whatsoever.  And we don’t want to watch other people do it either.  This is normal.  This is how we allllllll are.  I am going to use a method my friend Emma Tempest (she is @theplaycoach on FB and IG) and makeyourownrainbows.com is her website.  She taught me a method called “spill the TEA".  Which stands for Thought, Emotion, Action. 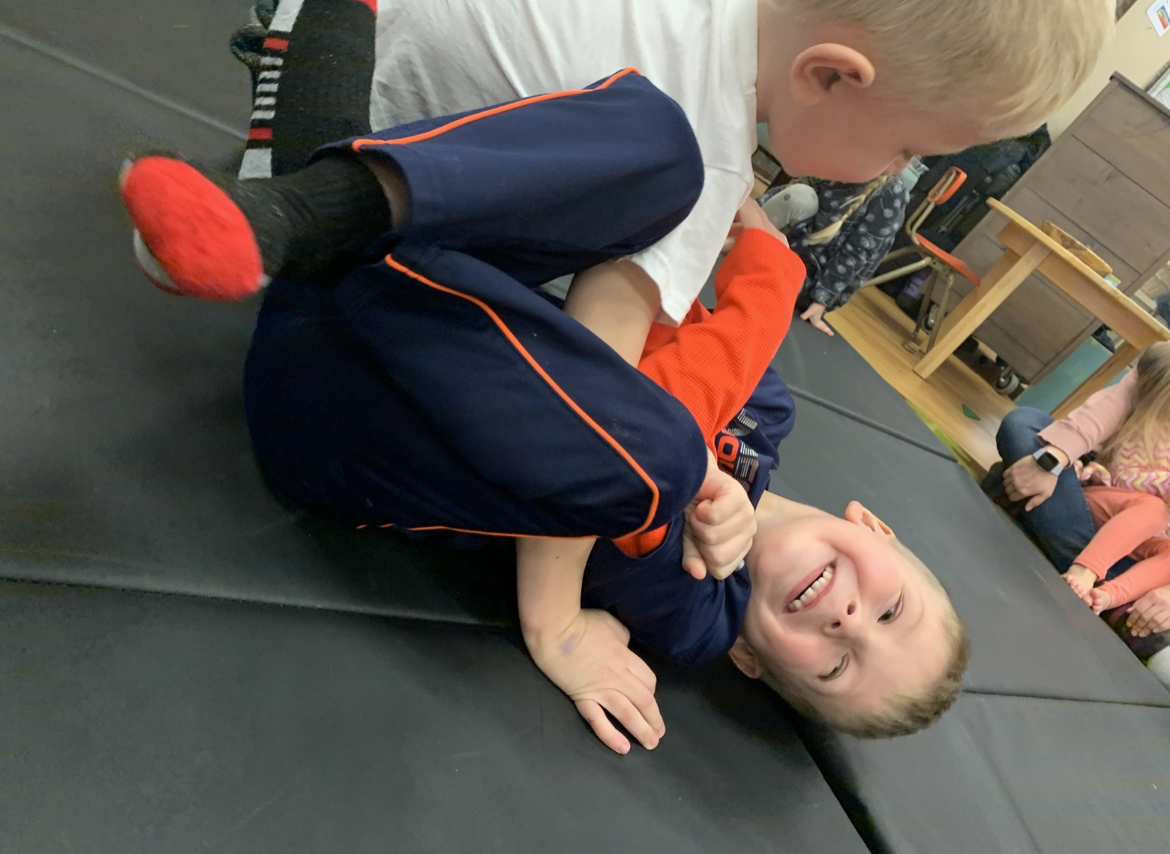 Now, back to finishing the stress cycle…  I was at a retreat last weekend led by James Victore, he is the author of a book called Feck Perfuction that I highly recommend.  James told us a story about an impala and a lion.  Lion is hungry and is stalking Impala.  Lion leaps and Impala has to choose fight, flight or freeze.  Impala runs.  Lion chases.  Impala zigs, Lion zags and Impala gets away.  Impala has a gazillion stress chemicals that were just flooded into its body.  Impala hides behind a bush and his innate action is to dance out the chemicals.  He shakes and shakes and moves until he feels better.

In humans, we have to move our bodies to get those chemicals out.  Dance, a walk, a workout, or just a good laughter session (as Emma Tempest would suggest) are what we need to do to help us feel better.

Here are a few ways to support battle play and play fighting.

There is so much more I could jam on about this topic, but I hope you leave this post feeling a little more enlightened about battle play and play fighting and will find ways to say YES to this type of play in your environments.

Would you rather listen?  This blog post was created from one of Kristen's podcasts!

Stay connected and get all the goodies first!

Join the mailing list to freebies, social media posting templates and inspiration for your play based learning journey!

We hate SPAM. We will never sell your information, for any reason. 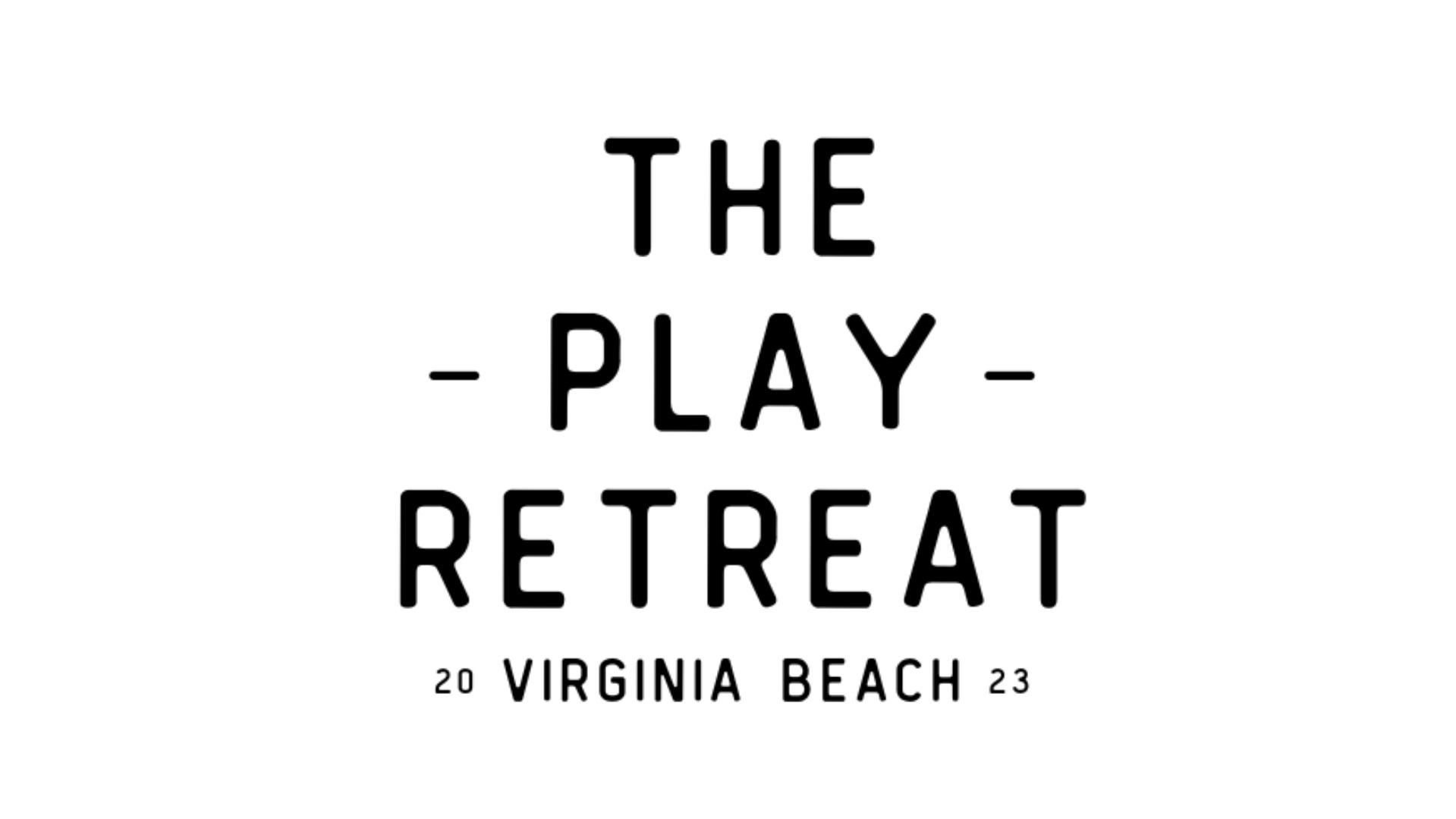 Get on the Waitlist!